If the Azores are not yet on your travel list, go ahead and add it in…. RIGHT NOW! During our Disney Magic eastbound transatlantic voyage, we got to stop and visit the Azores for a few hours. The Azores is a group of Portuguese islands in the middle of the Atlantic. Our family likes to travel in luxury, but when comes the time to discover, we turn into little explorers and prefer freedom to organized visits. Naturally, after 6 days at sea on board the Disney Magic, Christian and I were super excited to touch land in a place we’d never seen before. Can’t quite say the same of the kids but they warmed up to the adventure.

What we like to do when cruising to a port we don’t know, is inspire ourselves from the excursions offered to the passengers. The night before disembarking in Ponta Delgada, Azores, we watched the quick on-board video of the Port Adventures offered to get a taste of the island to come. Disney offers beautiful shore excursions, full with one-of-a-kind experiences for the whole family, which we totally recommend. We just prefer discovering at our own pace and let spontaneity kick in.

The Disney Magic docked around 7.15AM and authorities had cleared passengers to come out a few minutes after that. Now, with 4 hours of jetlag in us and kids who did not comply with our early bedtime policy the night before, we dragged ourselves out of bed at 9AM. We were out of the ship by 9.30AM and had rented a car right outside the port by 10AM. Our 2 preferred ways of discovering a cruise destination is to hire a taxi for a tour of the island or rent a car. In this case, with so much to see, we preferred renting a car.

Armed with a map from the car rental agency and a few images from the Port Adventure video, we knew we wanted to drive along the coast, see some of the volcano crater lakes, and were very hopeful to experience a natural thermal pool. Our best recommendation to avoid crazy roaming charges, is to download ahead of time, the Google Maps area of the location you will be visiting. Our All-Aboard time that day was 3PM. With just under 5 hours, we were on a mission to see as much as we could of the beautiful island of São Miguel. We decided to start driving west along the coast and let ourselves be surprised by the beauty of the Azores. The weather that day was grey and foggy and at times, the visibility was under 50 feet. But the clouds and fog gave the island a very mystical feel. We drove through landscapes reminiscent of Germany or Switzerland, surprisingly green and luxuriant. Beautiful wild flowers and exotic plants grew everywhere. We almost felt as if we were driving through a botanical garden, rather than on a country road. Our first destination was a Geoparque, on the western part of the island. We entered the park at its south-eastern tip and parked the car for a quick walk through the forest. Lagoa do Canario was of unexpected beauty. The spontaneity of our discoveries is something I truly enjoy. We never know what comes around the next curve and explore with no agenda, other than a general idea of key sights on our checklist. We wanted to continue walking but realized that the distance to the next lakes in the Geoparque was too long for the short hours we had left on the island. We took the car and drove to the next viewpoint, or Miradouro in Portuguese. Now, this one was special and worth our trip to the Azores. Everything after that would be bonus. We hiked a stunning trail and given the meteorological conditions, we had the place to ourselves. It was just us and another lady and the luck of the skies clearing up for a few minutes as we got to the top. The kids loved trekking along the cliff. They are little troopers and got used to experiencing “big people” travel since they were little. We take them everywhere with us and never let them hinder us from exploring – they trek, walk, hike with us and love pointing out to their treasured discoveries along the way.

At the end of the trail, we were rewarded with an exceptional panorama of volcano craters turned into lakes. From up there, we saw the large Lagoa Azul and two smaller lakes – Lagoa Verde and Lagoa de Sao Tiãgo.

FROM THE GEOPARQUE TO THE COAST

Coming down from the Geoparque, we somehow took a wrong turn, taking us a bit more east that we had wanted to, which in the end, gave us some time for a wonderful experience at the end of the day. We drove alongside the ruins of an old aqueduct, lost in thick fog with tranquil cows in its background. Images like those are worth a thousand words. Through them, you feel for the region, its people and natural habitat. Something tells me that the weather we experienced is not uncommon in the Azores. Clouds often get stuck on the high volcanic mountains, bringing rain and moisture to the land, transforming it into the luxuriant landscape we came across. We finally hit the coast, around the town of Santo Antonio. We let street signs guide us to several Miradouros. Often parking the car and hiking a few meters of steep trails or stairs to discover breathtaking points of view. The never ending coast reminded us of southern Portugal, only the cliffs were black from the volcanic eruptions that modeled the island.

You will soon learn how much we love thermal pools. Check here the Secret Lagoon we found in Iceland. We got accustomed to them while living in Germany, where we’d visit them as often as we could. Anywhere we travel to, we now try to visit them and go for a swim. When I saw the little sign on the map, indicating a “Zona Balnear Thermal,” or thermal bathing site, we knew we had to fit it in. With under an hour and a half left until the All-Aboard, we found a way to make this site a part of our return route. We drove to Ribeira Grande and got on the street that took us straight to Caldeira Velha. At the end of a steep curve, up a volcanic mountain, we found the little entrance to the thermal baths. Paying a mere 16 EUR for the entire family, we entered the unbelievable site. We like nature – this was nature. It was jungle! But so neat and clean, we only regretted having less than 45 minutes to spend there. Caldeira Velha is made up of 3 natural hot thermal pools. Dug in stone and quite shallow (70 to 90 cm deep), the water comes straight out of the ground at nearly-boiling temperatures. It is cooled down to around 40 degrees Celsius, making it the perfect temperature to spend time and relax. The backdrop of jungle-like foliage up the surrounding mountain are incredible. Upon entering Caldeira Velha, you have left modern civilization and entered a paralleled world, half-way between dream and reality. If you can, allow yourself several hours there! The site has great amenities with showers, bathrooms, changing stalls, as well as a little museum. A fourth pool, slightly cooler at about 25 degrees Celcius, features a natural waterfall and slightly bigger swimming area. With the rain pouring of us, we preferred staying in the warmer pools and soaking in the environment.

BACK TO THE SHIP As we drove back to Ponta Delagada, amazed at our beautiful visit on the island of São Miguel, the road took us to the top of a volcanic mountain. We left a couple of view points behind us, the fog unfortunately too thick to see anything around us, but the views to the Lagoa do Fogo below us must be stunning under clear skies. We made it back to the ship 15 minutes prior to the All-Aboard and felt fantastic about our day. We only wish we would have had more time on land to see more of the island. We maximized our visit to Sao Miguel and highly recommend this tour to anyone with a few hours to spend on the island. Find below all of the sites on our itinerary from and, back to, Ponta Delgada: 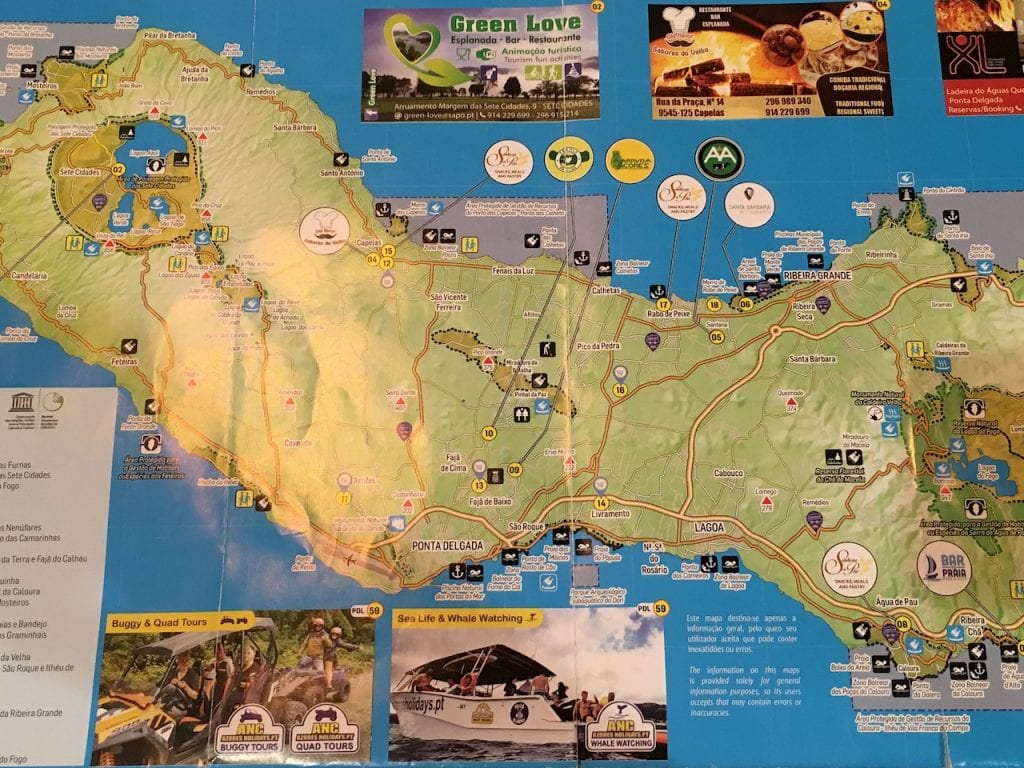 Have you been to the Azores? Let us know which island you visited and which sites you recommend seeing. We know we’ll be back!

Enjoyed the article? Pin it for later: Related articles you might enjoy:
Ibiza – The Natural Island We Did Not Expect
Casual Walk Around Cadiz, Spain
Malaga, Spain and its Unexpected Beauty
10 Reasons to Cruise on Disney Cruise Line